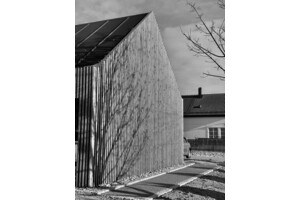 Heilgeistquartier Woldegk
05/2022
Neue Heimat AS and the German office of Milatz.Schmidt Architekten from Neubrandenburg have won the second prize in the project competition on the rebuilding of city-block in the historical town center of Woldegk. "Since the jury chose not to reward a first prize, we basically feel like we have won this thing" - says Martin Ebert, CEO and founder of Neue Heimat AS, smiling.

The site borders on the remains of the old city wall from the 14th century. The project is planned on the site of the historic Holy Spirit Hospice, that was removed in 1796. The new neighborhood-center is placed on the site of the lost Holy Spirit church and by that represents a 21st-century version of the important role the site once had in the social fabric of Woldegk. The architecture is based on small-scale volumes and the typology of the historic city.